Welcome to Glencoe's Downtown Tuneup, the project website and collaborative workspace for residents and stakeholders to interact, share ideas, and help make Downtown Glencoe even better.

In the news: Draft Report 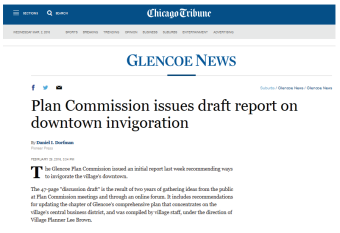 The 47-page “discussion draft” is the result of two years of gathering ideas from the public at Plan Commission meetings and through an online forum. It includes recommendations for updating the chapter of Glencoe’s comprehensive plan that concentrates on the village’s central business district, and was compiled by village staff, under the direction of Village Planner Lee Brown.

Alterations to the draft report are expected to be made after additional public input is gathered at open houses tentatively scheduled for the spring.

Plan Commission Chairwoman Caren Thomas said input from the open house sessions will be incorporated into the final report, which will be delivered to the Village Board. That could happen by this summer, she said.

Thomas said the two-year process of compiling the draft report has been “glacial” but taking the time to do it was necessary.

“Nobody wants to rush,” she said. “The question will become the priorities — which are more important and which can be waited on.”

Plan Commission marks 96th anniversary with nod to the past